Looking for something entertaining to do or to eat while you're sailing around Newport Harbor?

It's almost a requirement to experience Newport Beach's dock and dine culture, which is renowned for its fantastic waterfront eating and stunning views. If you're searching for a casual lunch, a good glass of wine with a high-end cut of meat, or to celebrate a birthday, there are many different sorts of restaurants that provide stunning views. 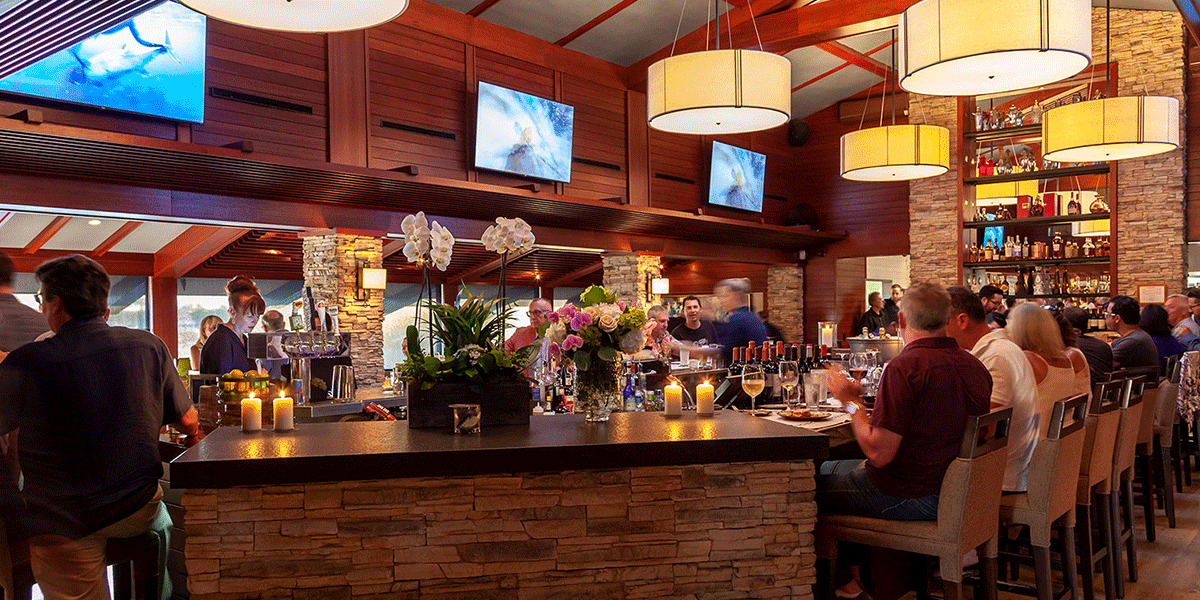 Its beautiful Harbor view location is warm, comfortable and stylish…a place for a casual lunch, relaxing dinner, weekend brunch, happy hour or late-night snacking. It represents a beach and water oriented lifestyle that many locals enjoy in the golden triangle….Cabo, Hawaii and Newport Beach.
The Cannery 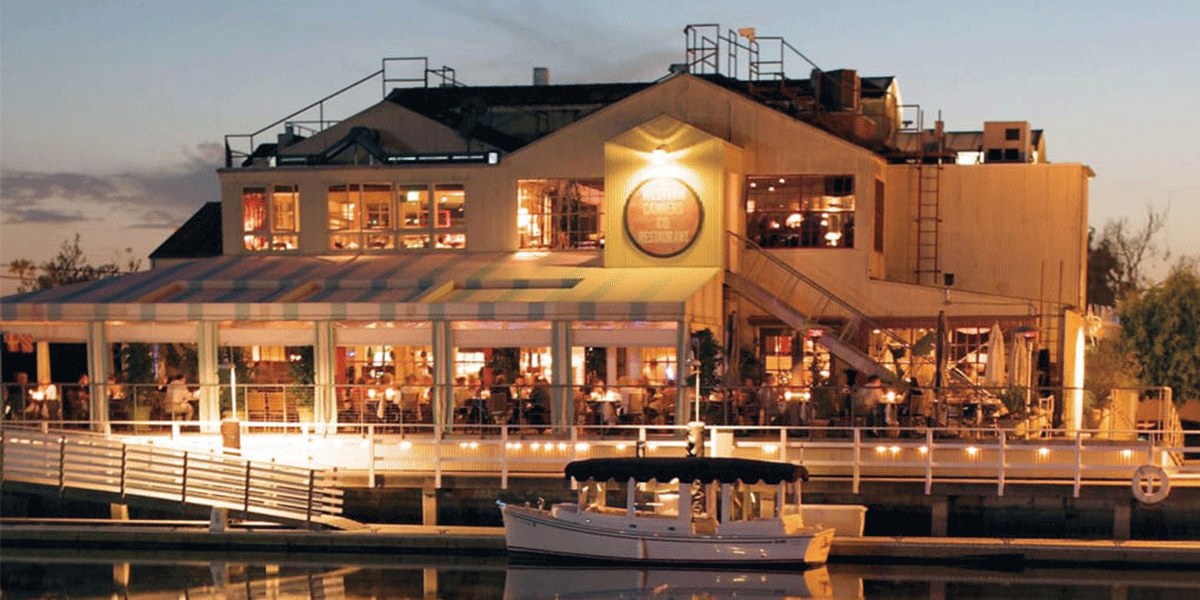 The Cannery has a spacious patio where you can relax and enjoy the luxury yachts cruising by on the Rhine Channel. Let the Cannery chefs create the perfect party, lunch, dinner, or dessert cruise menu for you to take out on the water. This is the perfect place to stop! Dock reservations are suggested.
Harborside 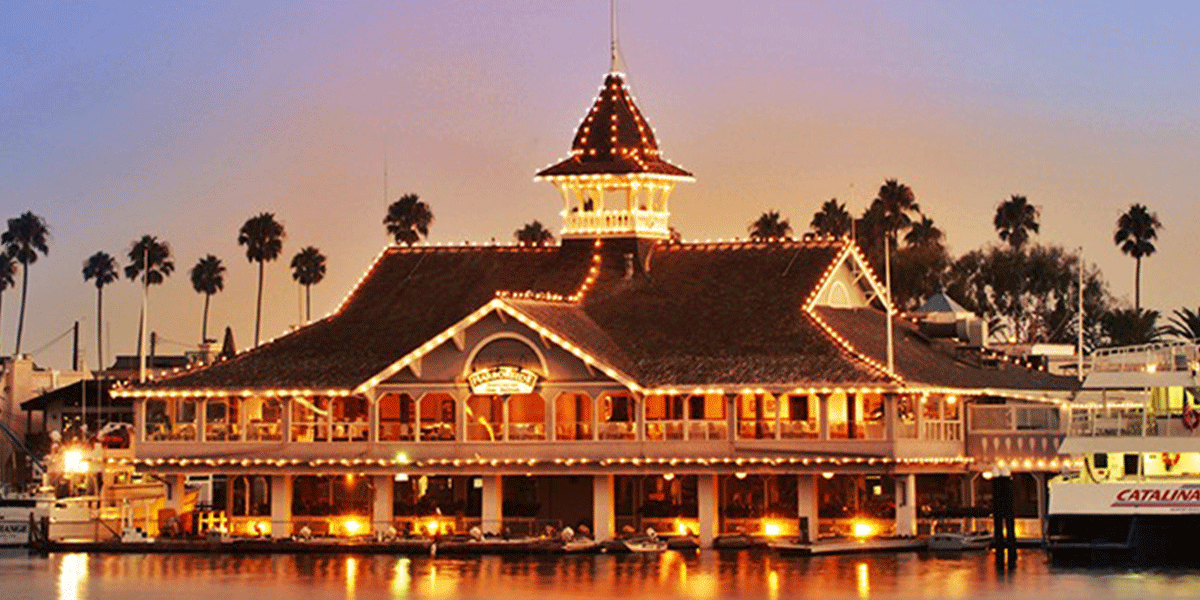 The Balboa Pavilion has been a beacon in Newport Beach since 1905. Offering a wide variety of delicious entrees to choose from, including fresh seafood, signature steaks, and a champagne brunch every weekend. Harborside Restaurant is a fabulous full-service restaurant and banquet destination.
Bluewater Grill 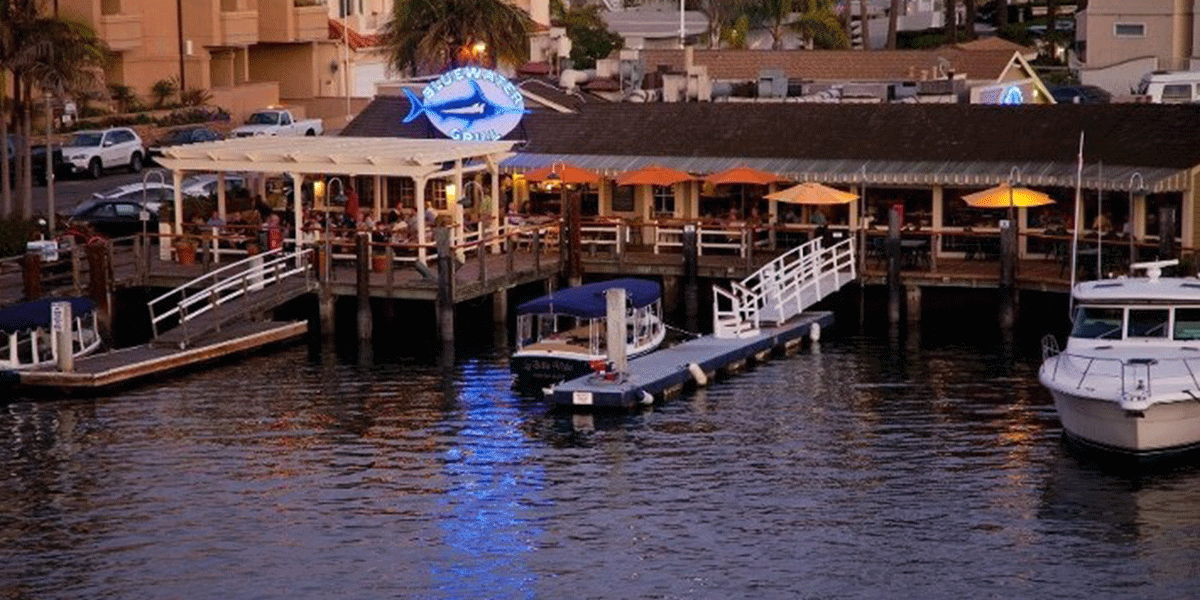 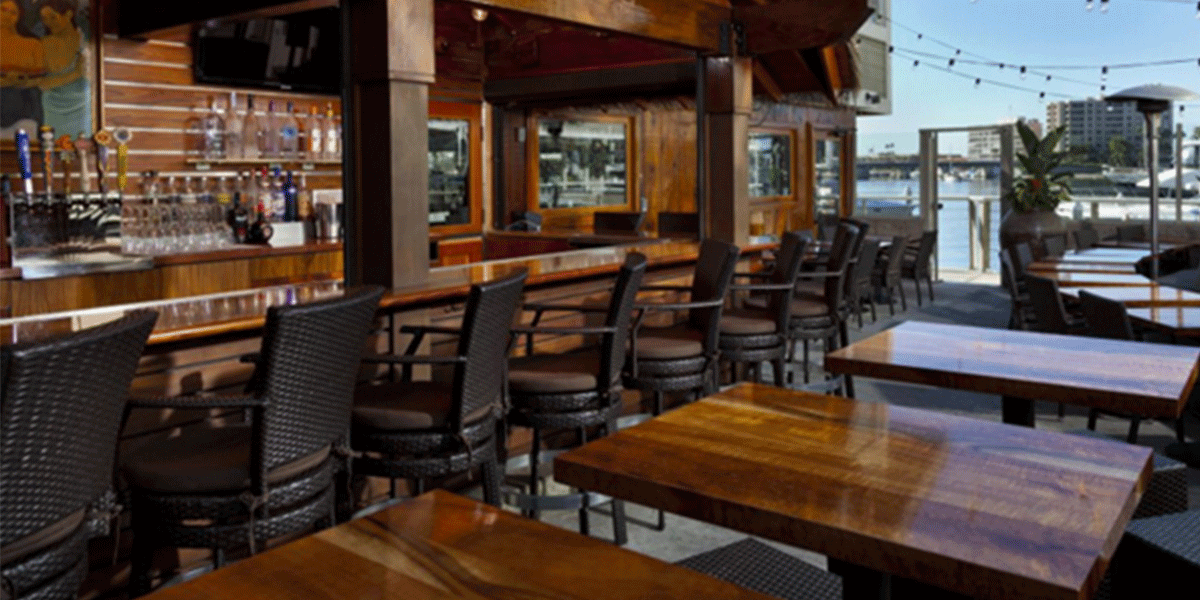 Billy’s at the Beach has been bringing the exotic flavors of the Hawaiian Islands to Newport Beach for more than ten years. Offering a wide variety of appetizers, salads, steaks or fresh fish flown in daily from the Hawaiian Islands.
Newport Landing 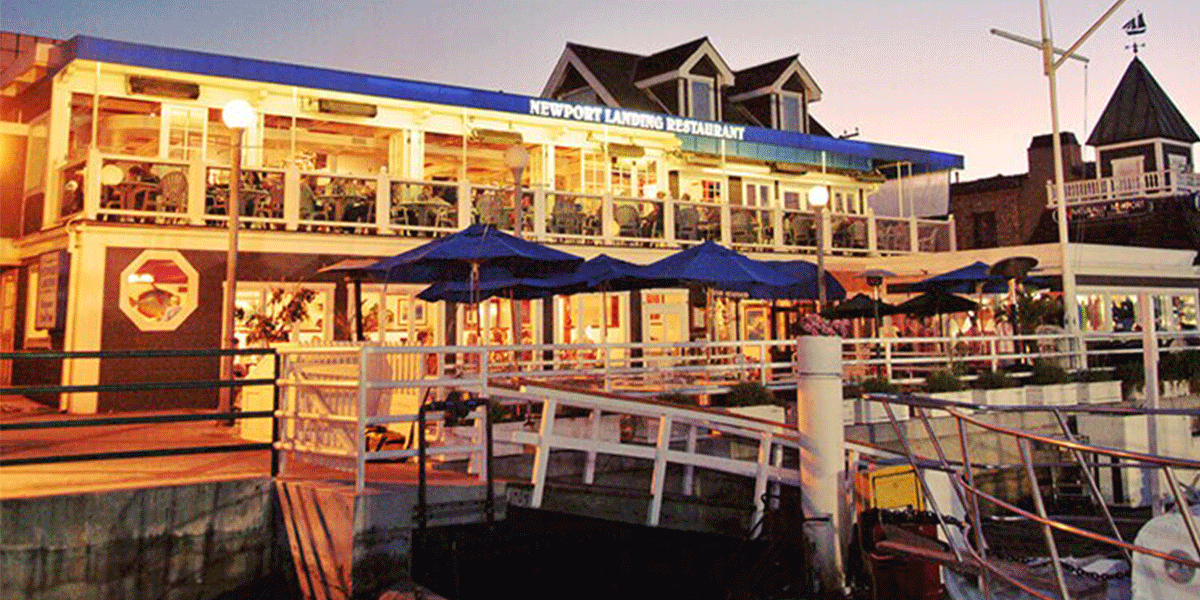 Located on the Bay overlooking the historic Balboa Ferry with a panoramic view of Newport Harbor and Balboa Island. Newport Landing provides the best of Southern California – incomparable cuisine, exciting wine and spirit list, and a unique location.
Woody's Wharf 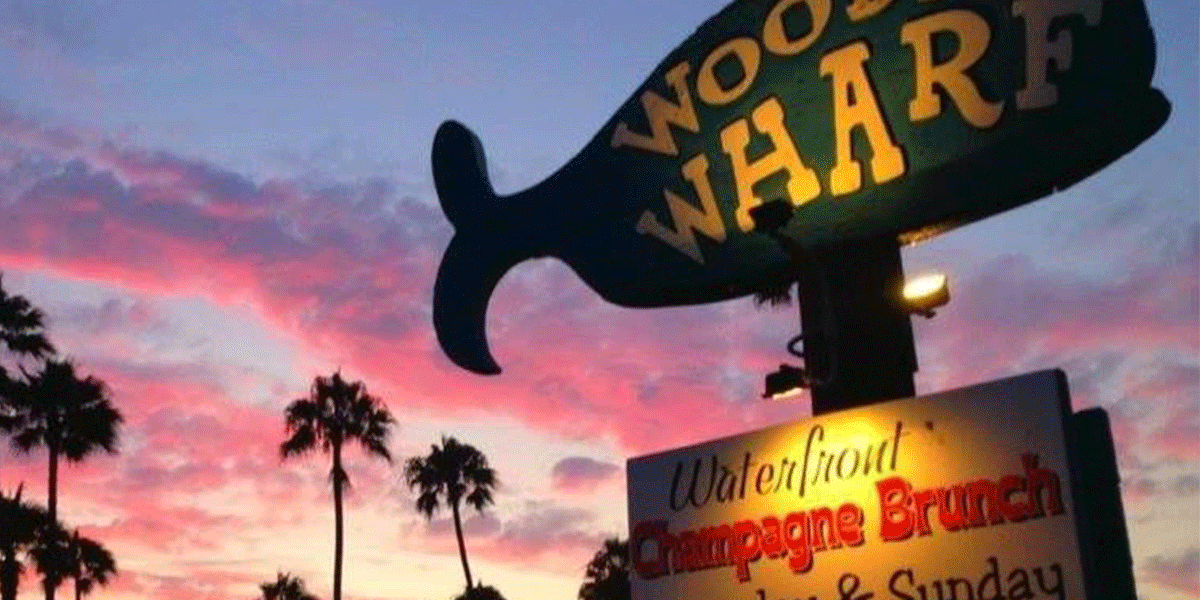 Woody’s Wharf has been a widely popular Balboa Peninsula destination since 1965, serving steaks, seafood, and happy hour snacks to Newport Beach crowds. Woody’s is famous for it’s bay front patio and for take-out service delivered straight to your Duffy.
The Winery 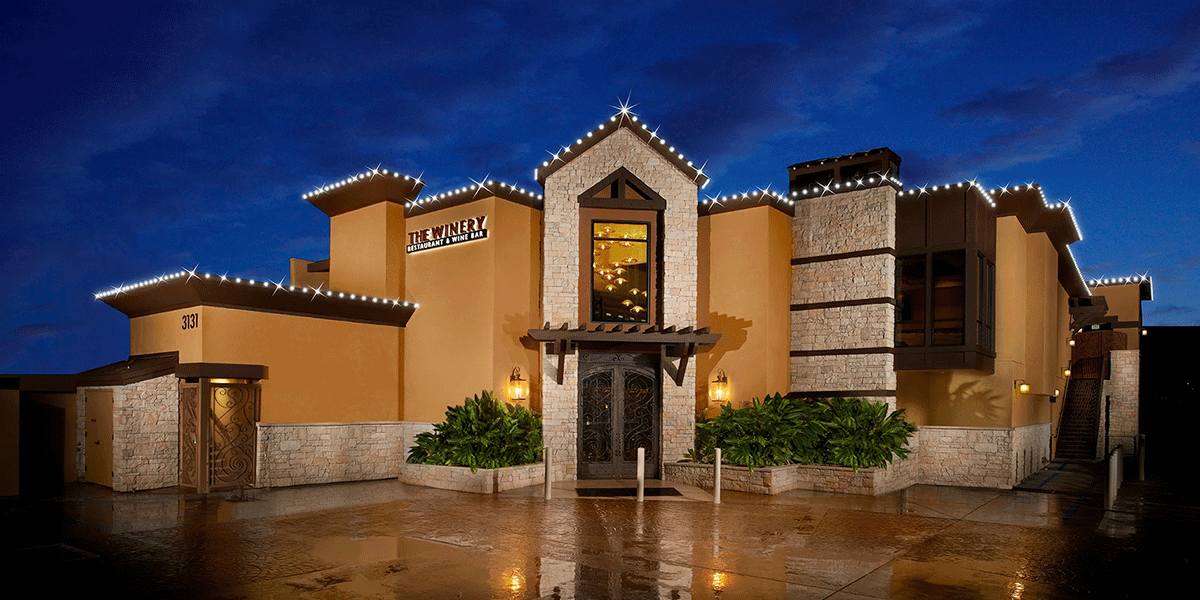 The Winery Restaurant & Wine Bar’s overlooks the Marina with a hip, vibrant, sophisticated setting. A menu of contemporary California regional cuisine creates a cutting-edge dining experience. The Winery has been recipient of many awards and honors, including Riviera Magazine and the Orange County Business Journal’s “Restaurant of the Year.”
Sol Cocina 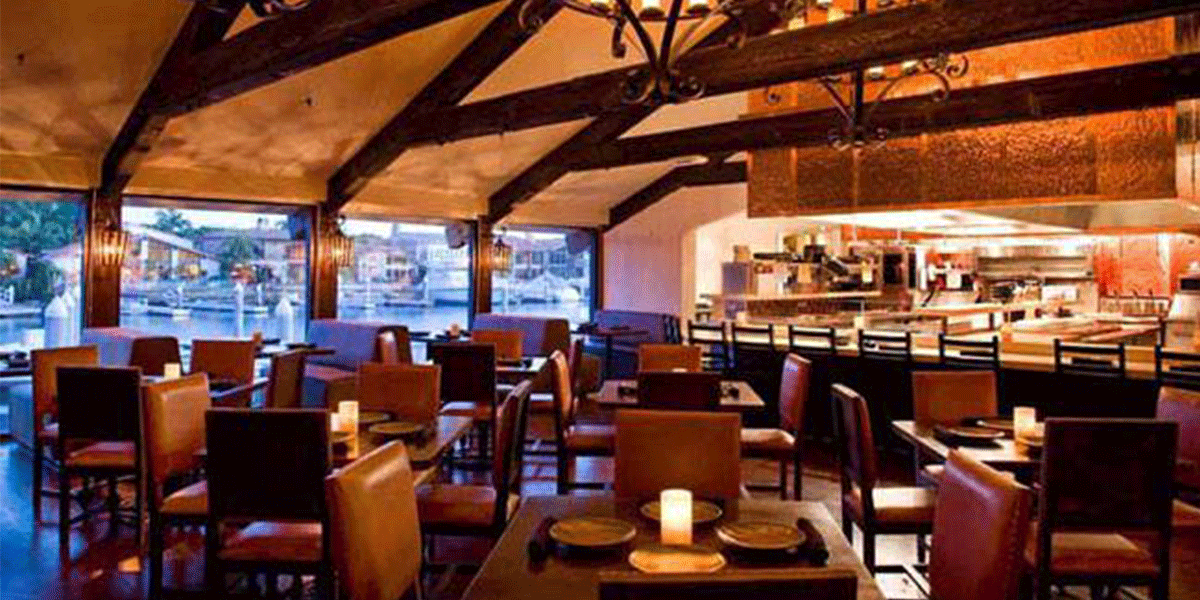 SOL Cocina is a unique restaurant and bar celebrating traditional Baja cuisine with a fresh, modern interpretation. Designed to echo the expansive sea, sky, and desert of the Baja peninsula, SOL features old world charm and urban comforts, including an open exhibition kitchen with seating that mimics a Baja taco bar along with a vibrant bar offering specialty cocktails and artisan tequilas.
Nobu 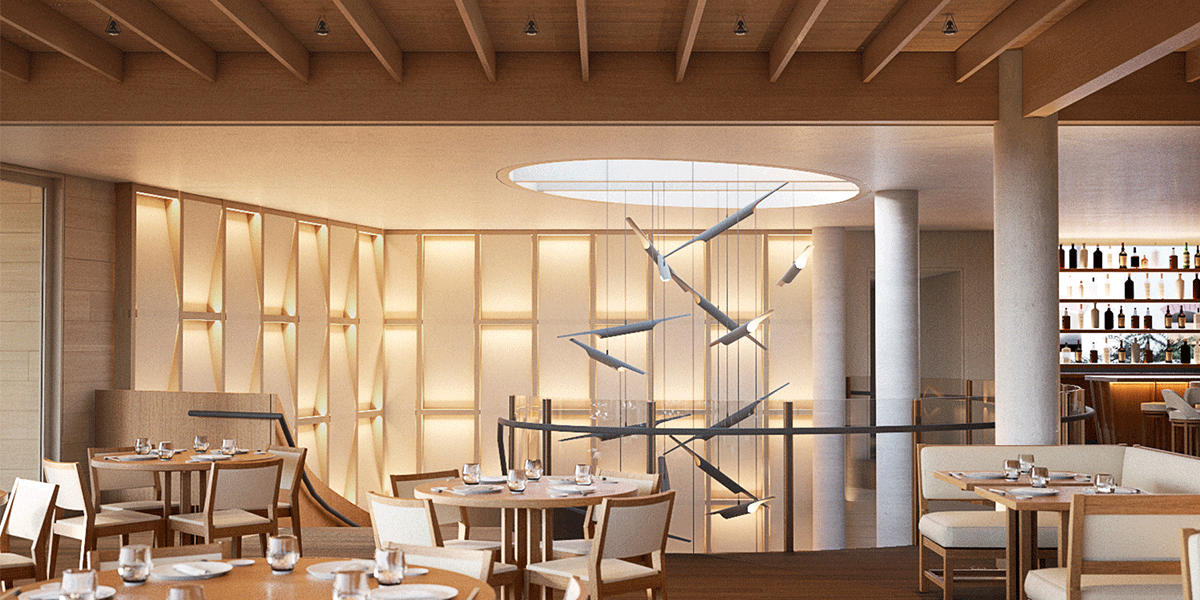 Nobu Beach recently opened in April 2017. Designed by Studio PCH, it has been crafted with their signature aesthetic of luxury and comfort in mind to create a clean and elegant atmosphere at a beautiful waterfront property. Views of the Lido Village Marina are available, with outdoor patio seating and an entire floor dedicated to the bar and lounge.

The greatest recreational harbor in the United States' west coast, Newport Harbor, was created in the early 1900s as a semi-artificial harbor. Originally a center for marine businesses including boatbuilding, shipbuilding, and commercial fishing, it is now mostly used as a popular location for outdoor sports like sailing, rowing, kayaking, paddle boarding, and, of course, electric boating.

The historic harbour of Newport Beach is home to many of the city's famous landmarks. While sailing the bay in one of our boats, Vision Electric Boat Rental's scavenger hunt leads you through an exciting sightseeing journey so that you don't miss these places. 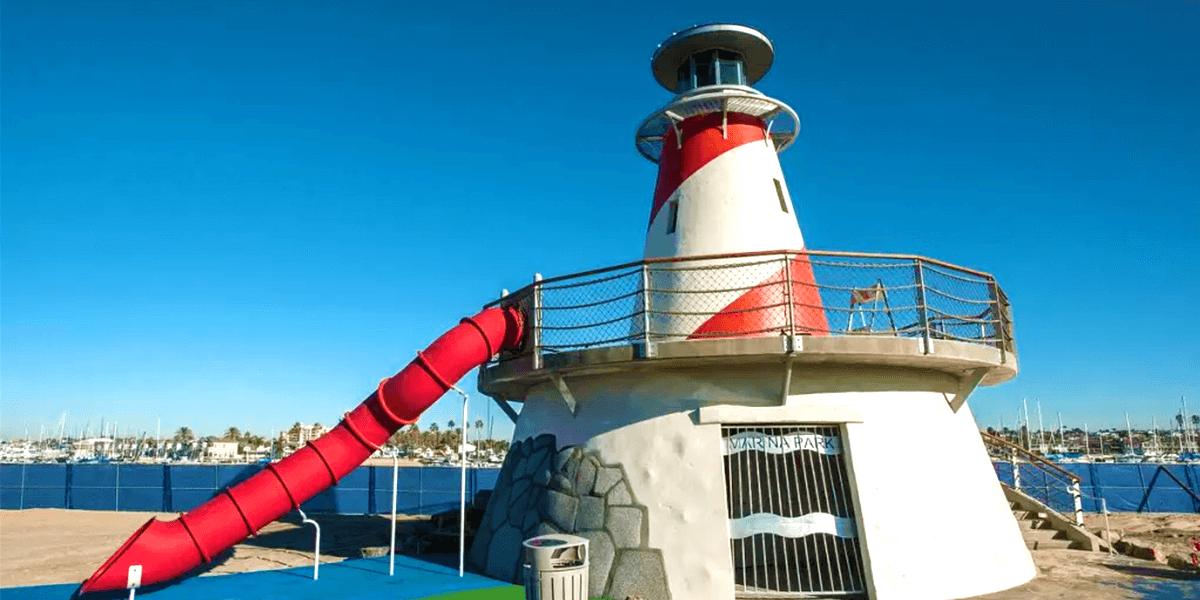 This lighthouse is a sailing center landmark! It sits in the Marina Bay park and they say it is the window to the harbor. Before it was a community park, back in 1919 This was a campground for only 75 cents a day! Then in the 1950s the campground was converted into a mobile home park.
Statue of Liberty 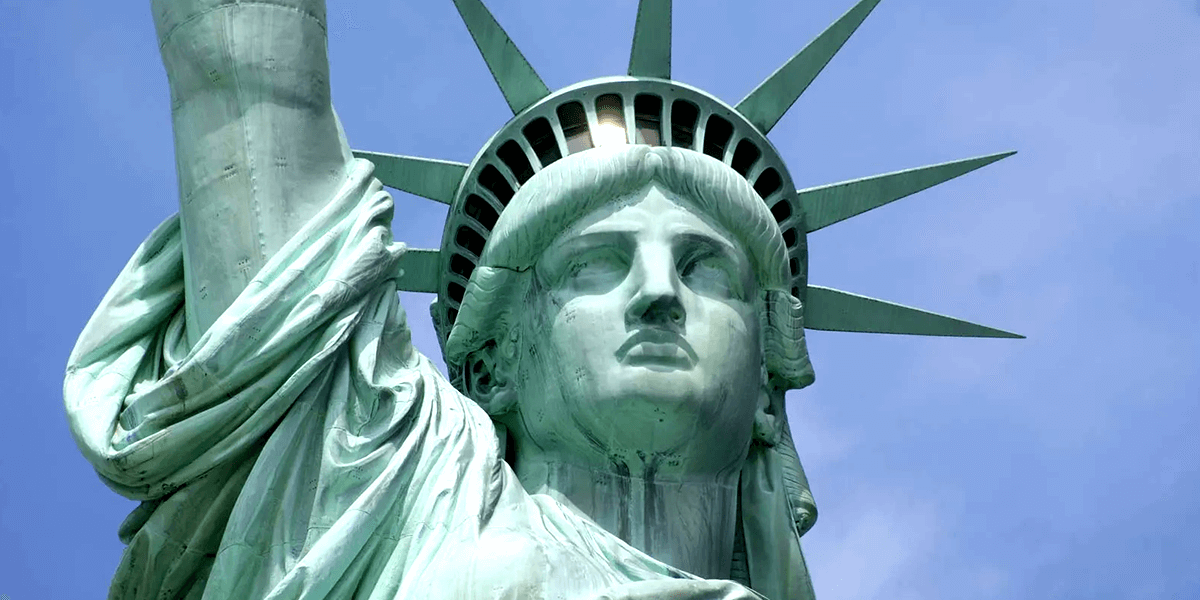 The replica of the Statue of Liberty is among the whimsical sculptures found on Balboa Peninsula in Newport Harbor. Can you find both?
Palmer Luckey’s Army Boat 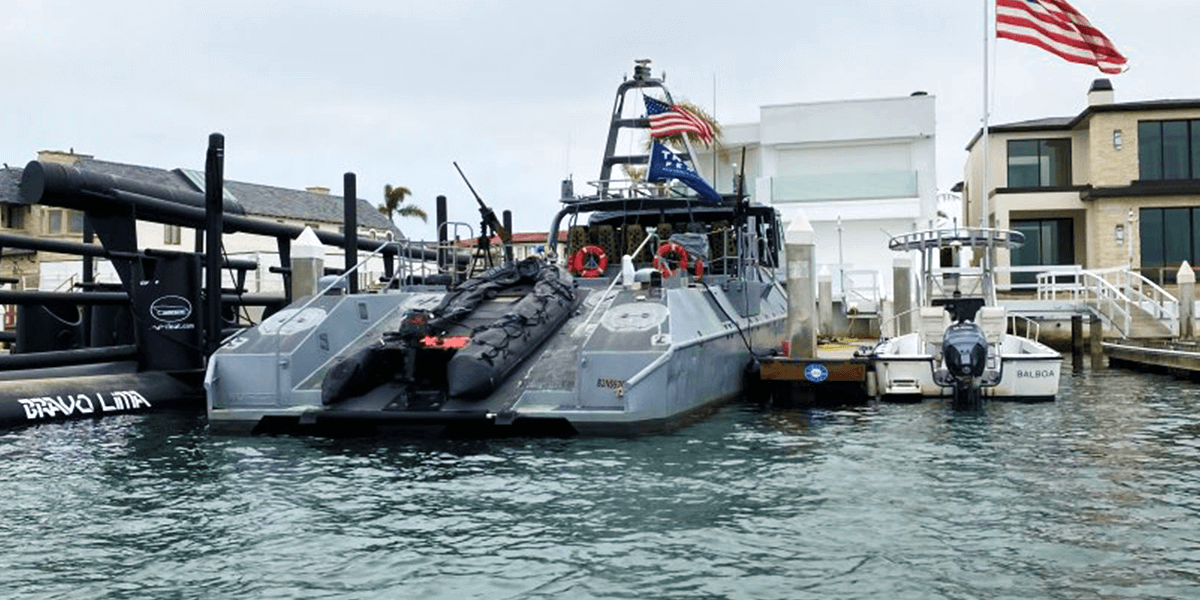 The army boat is owned by Palmer Luckey. Luckey is founder of, Anduril, a company that builds cutting edge technology for the U.S. government.Luckey previously co-founded Oculus Rift, a VR company purchased by Facebook in 2014
Ferris Wheel 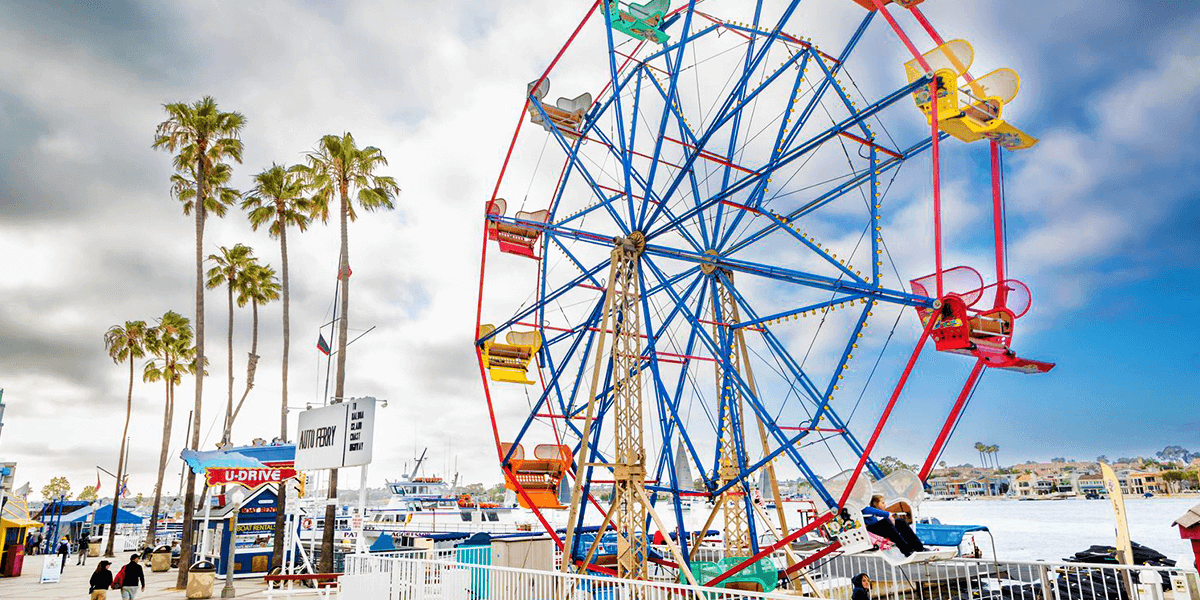 Since 1936, the Fun Zone at Balboa Village has been providing affordable entertainment for all ages, and it’s most notable for its Ferris wheel! The famous wheel has been experienced by over 6.5 million riders and has majestic views of Newport Harbor and the Pacific Ocean. This Ferris wheel was also featured in Childish Gambino’s hit music video ”3005”!
Balboa Pavilion 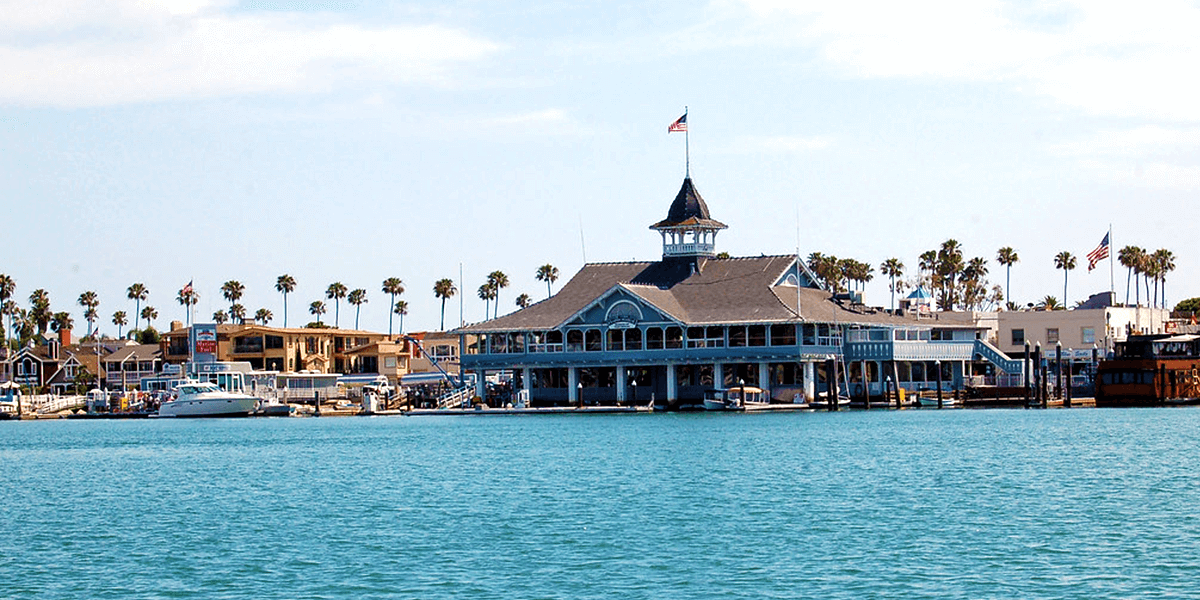 Balboa Pavilion is a historical landmark for Newport Beach and one of California’s last recreational pavilions standing from the early 1900s. Balboa Pavilion was built to attract people from all around for entertainment and land embellishment. Many businesses have occupied her from a bowling alley, a post office, a museum, to a bootleg casino! Today she still serves the public as a restaurant and a marine recreation facility.
Shirley Temple Former House 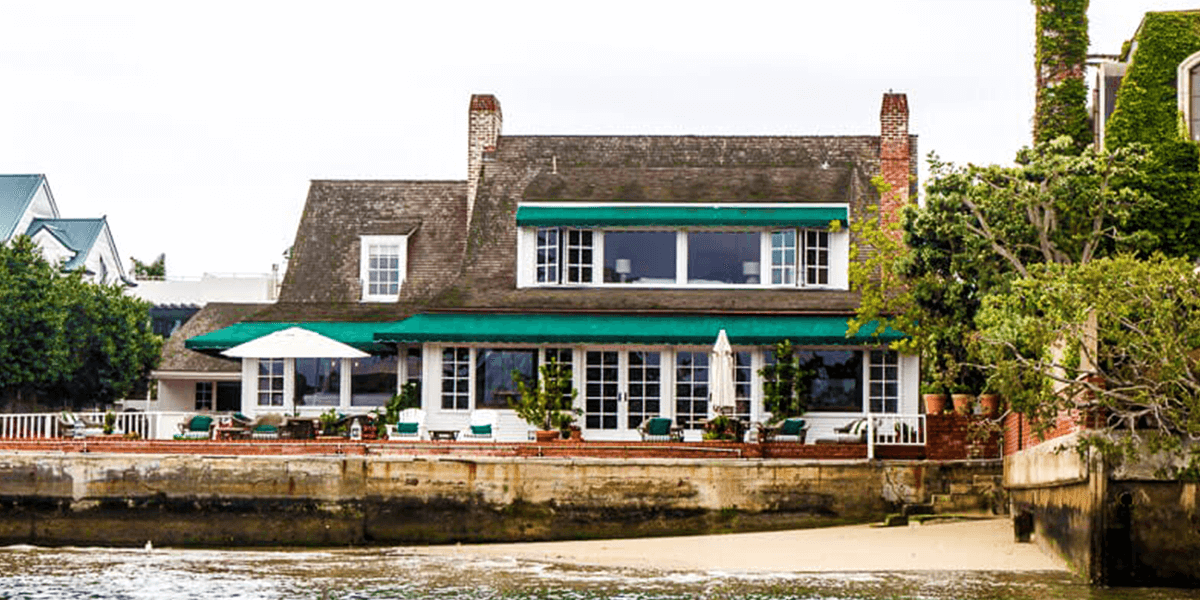 Shirley is a 1930’s original child movie star, Known for her dancing and singing but more famously known in Newport as the first ”Miss Newport Beach” at age 13! After Shirley Temple moved out, her house became home to actor Buddy Ebsen, and then home to talk show host Joey Bishop until he passed away.
Newport Beach Coast Guard 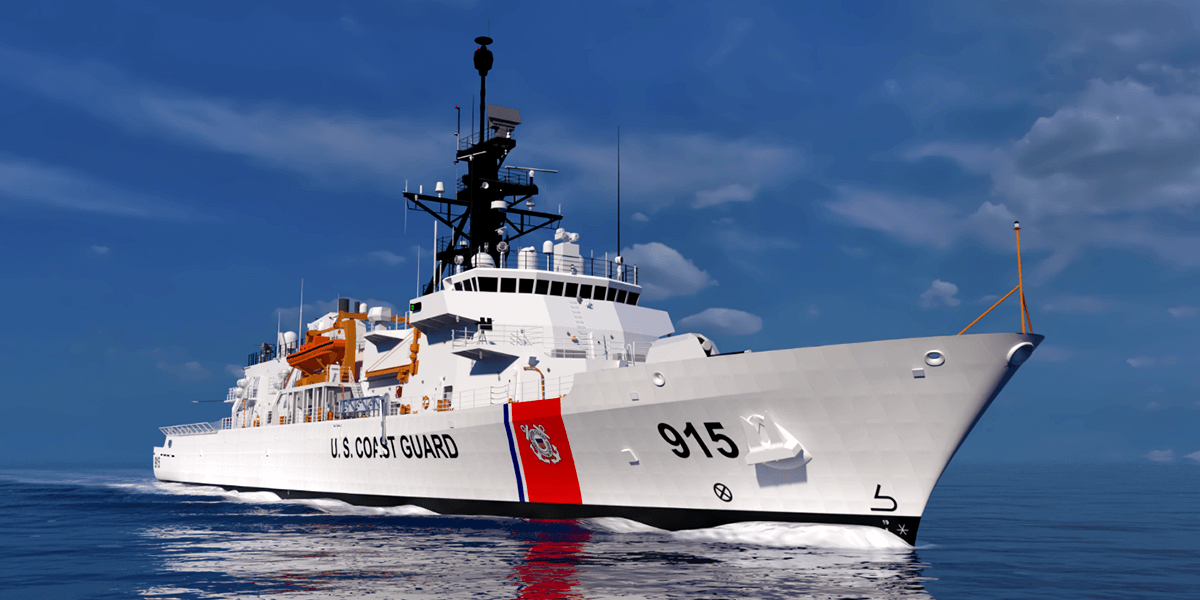 The U.S. Coast Guard Station in Newport Beach was incorporated in 1906. It is part of the Eleventh Coast Guard District that encompasses the states of California, Arizona, Nevada, and Utah, the coastal and offshore waters out over thousand miles and the offshore waters of Mexico and Central America down to South America. In their busiest fiscal year 2015, Eleventh Coast Guard District units responded to 1,994 Search and Rescue cases, saving over 365 lives and 9.9 million dollars in property.
The Bear House 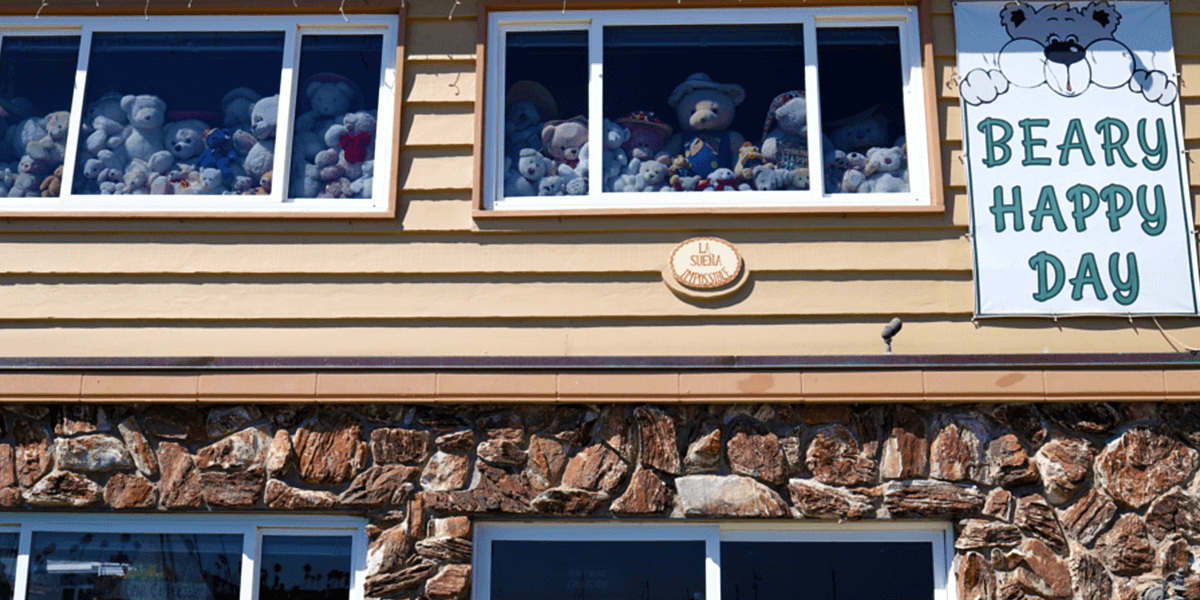 The Bear House is a bayfront house with huge stuffed bears looking out the windows of the 2-story home. Tourists from around the globe are impressed by the over 4,000 bear collection. Marcy Cook, the California ear collector, has been collecting bears for over 30 years. The couple who lived in the house had a little boy, who unfortunately passed away. Many people began to send bears as condolences, and that is when the bear collection began.
John Wayne’s Former Household 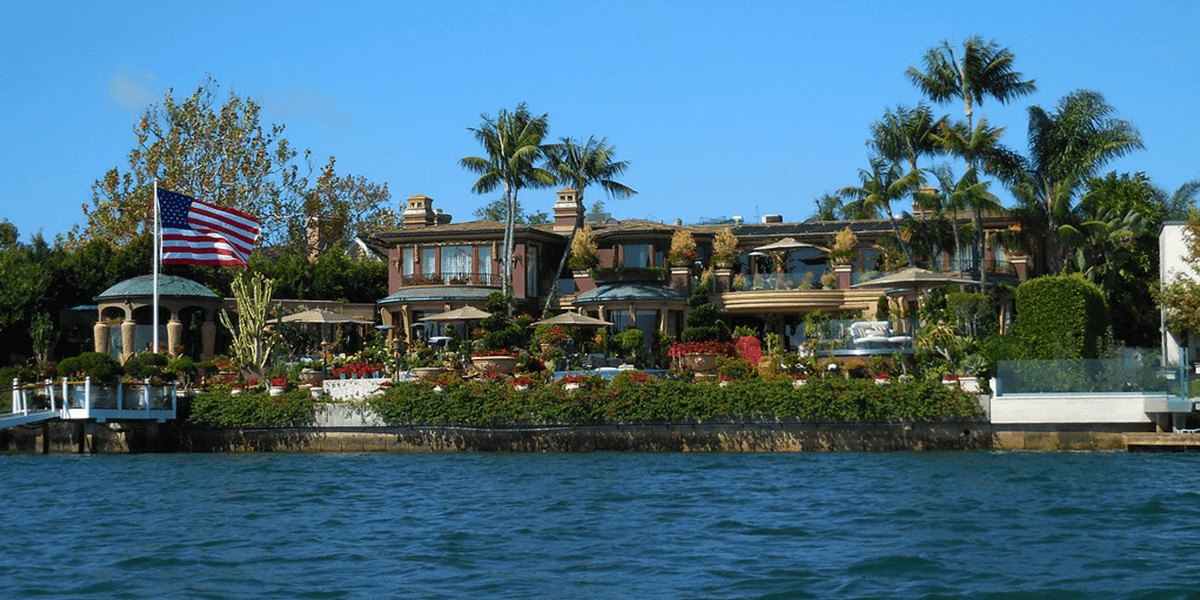 John Wayne aka ”The Duke” is most famous for his western films starring in the, award winning ”True Grit” (1969), ”Sands of Iowa Jima” (1946) and many more blockbusters from the beloved cowboy. Although he was Hollywood’s favorite cowboy, he was a nautical man at heart. Wayne’s most valuable possessions was his yacht, Wild Goose, which can still be found in Newport’s Harbor today! Wild Goose was listed as U.S. National Register of Historic Places in 2011. Can you find the Wild Goose?
Book Now 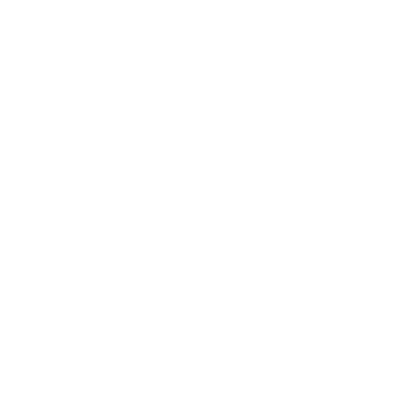 "Had an amazing time called in 2 hour’s before we actually arrived to the area same day and was able to get on the water. Great young staff who gets it!"
Kelvin Nodarse 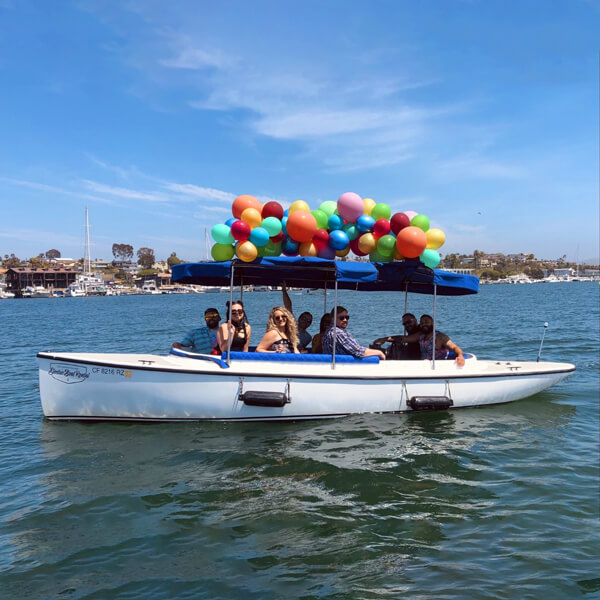 "We had a great time. It was a gift to us. The boats are clean and the staff is very nice. The only thing is, make sure to arrive early, the parking is not easy. We found it''s best to do Uber. Take light blankets or sweaters as it can get chilly if doing a late afternoon early evening."
Brenda Miller 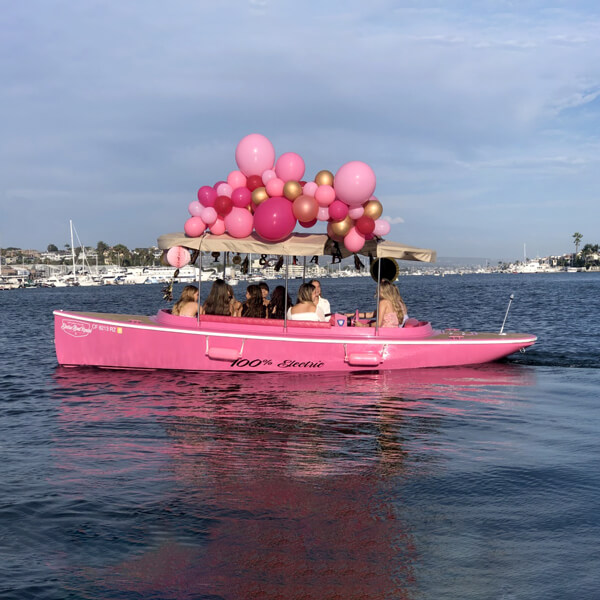 *All week long. Hours are subject to change according to seasons and weather conditions. Please call to verify hours

All right Reserved to ebrentals 2022